Hitting the age of 68 is no easy task and I'm sure, the next number of birthdays will probably be even less easy. But why hurry the process?  Aging doesn't mean you should ride slowly into the sunset like a withered old cowboy. They say, "keep them joints moving and keep riding as long as you can!" 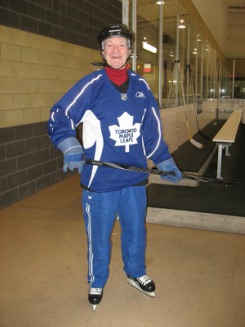 HERE ARE OUR GUIDES AT HOW THE GAME SHOULD BE PLAYED.

AVOID BODY CONTACT AT ALL TIMES.
KEEP THE PUCK ON THE ICE BY USING LOW VELOCITY
DURING PASSING AND DIRECTING THE PUCK AT THE NET.

ONLY FIVE SKATERS ARE ON THE ICE DURING PLAY
ONE IS GUARDING THE NET AND FOUR ARE PERFORMING
ON ICE.
SPARE SKATERS AS THEY COME OFF THE BENCH SHOULD RELIEVE
THE NETMINDER AS WELL AS OTHERS COMING OFF AT THE SAME TIME.
ONLY THE FIRST ONE OFF THE BENCH GOES TO THE NET.
-- PETER GOEHLE,
ORGANIZER 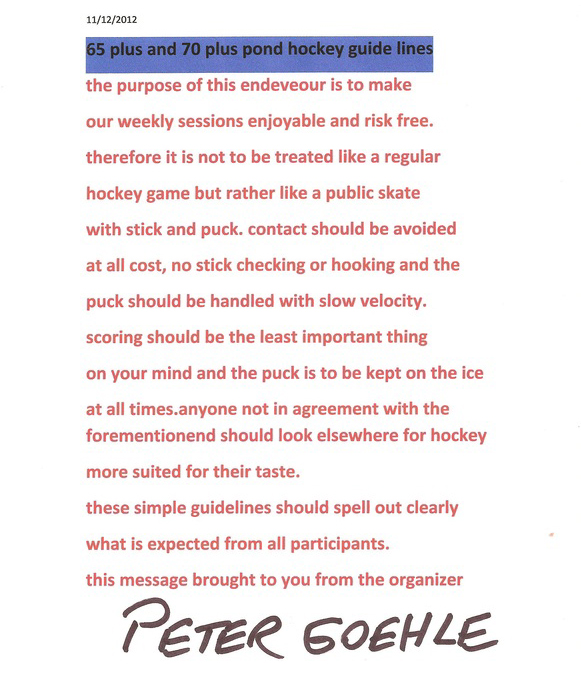