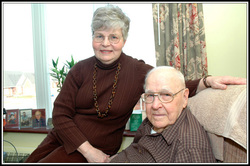 The beginning of December is a drab month for seniors because there's not much to look out at from their windows at the United Mennonite Seniors' Home. It looks cold out there. I made a bee-line this morning to Tim Horton's and bought a chunky chocolate chip cookie and regular medium coffee for Harry Rittenhouse. I ordered a French Vanilla and a cheese croissant for myself. Harry was in his usual pose, snoozing in his easy chair, head down on his chest. The minute I woke him, his eyes focused and his mouth gaped open with mock surprise. Judy had given me a gift card so I could get her dad something from Timmy's, while she and Wally (Marjorie's dad) were off on a cruise in the southern Caribbean. My chore was to visit Harry a couple of times a week to see how he was doing, so Judy wouldn't have to worry. Harry is 102. It was only last year that he had to give up his walker. He has to be pushed to the dining room now in a wheelchair. He wears Depends and has "to be toileted" by the nurses. The past year has been traumatic for Harry because he can't walk anymore and his memory is shot. Harry has a witty and dry sense of humour which still pops out now and again despite his short-term memory loss. He's quite philosophical about things: "There's nothin' much you can do about it!" It usually takes Harry half the visit to remember my name but at least he does. We have a ritual conversation.

"Hi Harry. You keepin' out of trouble?"
"Not if I can help it."
I hand him his coffee and cookie.
"Who's payin' for it?"
"Judy. She told me to take care of you while she was gone."
A young nurse comes in with a hot chocolate. She sees the coffee and decides to leave the hot chocolate for later.
"They take good care of me here," says Harry, "If it was any better, it'd be a nuisance." And he laughs. He remembers that Wally and Judy will be gone to the Caribbean for 2 weeks. He says he doesn't like traveling himself.
"Couldn't be bothered with it."
He's been all over Ontario, hunting and fishing, and that's enough for him.
"Up northwest, around Essex County, and way above Muskoka." He used to take his dog Bing with him on these excursions. "The best dog I ever had." He looks at two photos of himself on the window sill. One at the age of 33 with Bing. Harry's sleeves are rolled up showing the nice biceps he had as a young man. Then there's the photo of himself with glasses when he hit his 100th birthday. I tell him, that he doesn't look a year older than 80 in that photo. He chuckles.
Whenever Harry starts feeling down because he can't remember things, I change the subject and that usually works. He takes his situation in stride. "What day is it?" "Tuesday," I say. "Well, it don't matter anyhow," he says. "It's all the same to me."
"I'm anchored here," he grumbles. "Life sometimes hands you stuff you got no choice in." But the old spark still occasionally surfaces and Harry has a certain twist of phrase or a pithy comment that's just a treasure. I remember asking him one time:
"How're you feelin' Harry?" To which he replied without blinking an eyelash:
"Ain't got no toe-tag on me yet!"
He considers himself lucky because the nurses there are pretty good. "I don't need much," he says. I point to him, "You got warm booties on, your sweater and a cookie in your hand. What more can you ask for?" He finds that funny.
I bid my goodbye and tell him that I'll drop in again on Thursday. Despite his occasional drifting off into regret about his memory, I enjoy my visits with Harry. The easy going man that he once was always come out in some way or other and he throws out little phrases that are pure gems.

I remember when the Rittenhouses, Harry and Gert, sold their old house on Victoria Avenue some years ago and auctioned everything off because it was time to make the move into the seniors' home. They had a little apartment unit together there at the UM Home and seemed to enjoy it. Then Gert had a bad fall giving her serious head trauma. She started showing sings of dementia after that and started mixing things up. She had to be moved to one of the rooms on the opposite wing of the home without Harry. Gert had mood swings. Harry made it a point to visit her every day and he'd shuffle down the corridor each morning with his walker to her room. It's strange how you get separated by old age and health. You're a married couple living together for so many years and then you end up in separate rooms in the seniors' home like you're strangers. Gert, died several years ago. I think she was 95.
"The best wife in the whole wide world," says Harry.

I left Harry's room and walked down the hallway into the sitting area on the second floor to catch the elevator there. The 42" TV screen was on but nobody was watching it. A lady sat asleep in her wheelchair with her head drooping on her chest and her mouth open. What can I say about getting old? W.C. Field's little quip on his gravestone reads: "On the whole, I'd rather be in Philadelphia."

I wouldn't mind aging, if it wasn't for my health. I used this line with Harry once: "You know, things would be a whole lot better if we didn't have these problems." That elicited a chuckle from him. "You got that right!"
If I believed God would listen to a grocery list, I'd pray something like this: Please God, I'd like a cure for the following. I know the list is long but if you're all-powerful, you can do it!

Or I'd play the Let's Make a Deal game with God and say: God, I'll give up my grocery list, if you'd only cure Marjorie of her allergies, her osteoarthritis, her hot flashes and help her sleep well at nights. Only 4 things, thank you, God!